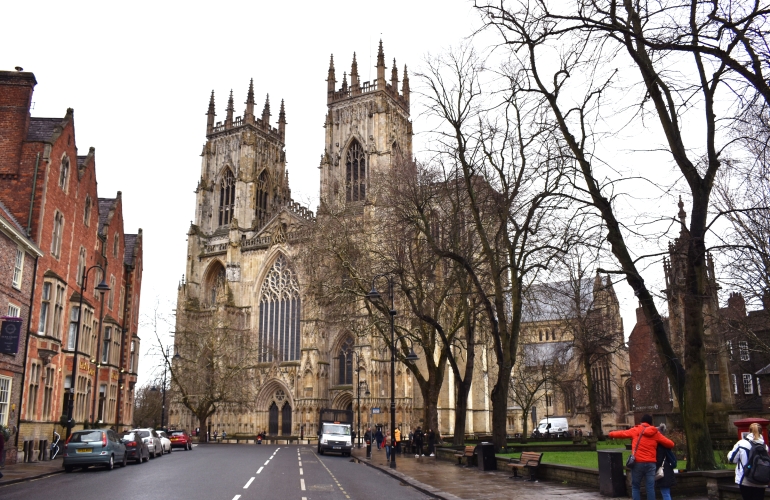 One of those days where the hills are the same colour as the sky—a dark blue or grey, blending with the clouds so that the tips of the hills are barely visible. Rain whips against the windows of the train carriages, and I try to spy the White Horse in the distance, but it’s no longer there.

I’ve been visiting York for a long time, and have never experienced such a dreary day as this. Perhaps I’ve always been lucky in the past, or maybe it was the thick cold I’d come down with, but the weather today just seemed cruel—berating me for leaving the house when I was clearly ill. Though it wasn’t raining when I set off from Yarm on the train, by the time I arrived in York less than an hour later the rain and wind had escalated, making the line of taxis leaving the station longer and slower. I suddenly wondered why I had come at all.

It’s an alluring feature of the town, the Minster. Leaving the station, it’s one of the first things you see walking into the centre of the city. Go under the medieval city walls and over the river and suddenly you’re confronted by it, in all its gothic glory. For a real experience, it’s best to go inside, and even better, to climb the 275 steps to the top of the central tower. On a good day (with the weather conditions I was experiencing, I doubted the tower would even be open today), visitors can see the entirety of the surrounding area, as well the inner city of York. It’s a gruelling climb, but worth it.

Today, I stuck to the cobblestoned streets, where the rain was actually starting to ease up. From my table in an upstairs cafe (which I’d taken refuge in after proclaiming the day a write off) sunlight was starting to streak down the sides of the buildings opposite, and it actually seemed like the afternoon might offer a renewed opportunity to walk around the city. Full of coffee and pancakes (Double Dutch on Church Street is the cutest little place for lunch, just to let you know), and by default, caffeine and sugar, I started to feel a little better and set off for a walk through the nearby streets while the rain kept at bay.

I started at the Shambles, a street that in the summer and at Christmas is packed with tourists looking to get a picture of the famous buildings, leaning in to each other in a manner that looks almost film-set-like. But this is no set—the buildings, from the fifteenth-century, just swaying a little with centuries of use. It’s a quaint walk—and was once voted the most picturesque street in Britain—but after hundreds of visits, it does become just another one of York’s shopping streets, full of chocolatiers, pie shops, and tea rooms.

Looping back round towards the Minster, I came across an alleyway called Coffee Yard. It doesn’t look like much, but actually leads you straight to Barley Hall, a former townhouse for a local priory which dates to the 12th century. Outside the Hall, you can no longer hear the tourists in the streets—they’ve been replaced by strange, medieval flute music, played through speakers at the hall’s front door. This is a place that most tourists, I imagine, wouldn’t find, located as it is off Stonegate, one of the main shopping thoroughfares. The lack of visitors, though, just makes the place all the more inviting, as if the alleyway has acted as a strange time machine.

I finished off my walk back at the Minster. The rain was starting to come in again, black clouds rolling over towards the Minster and contrasting with its sandy stonework. It really does occupy a fortuitous place in the city, inviting tourists both to and from the train station to see it up close. As the clouds opened, I strayed away from the Minster and back towards the station, knowing that, sure enough, I would be back here soon.

View all posts by abigail joy

One thought on “A Rainy Day in York”

Welcome to Singular Joys, a travel blog where I document everything from my local area of North Yorkshire to foreign travels and life in London.
New blog posts every Tuesday and Saturday! 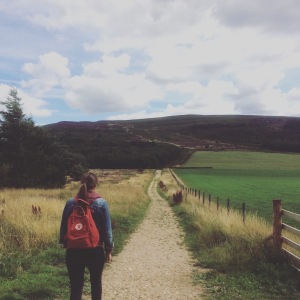 Anyone know where this photo was taken? It’s a very important place in Rome for any literature fans... 📖 . . Finally got something new up on the blog today! Had a very chilled out bank holiday weekend to de-stress from job interview excitement 😴 For today’s post, I revisited my trip to Rome in January this year, where I made a few little pilgrimages to places connected with the world of literature, including @keats_shelley_house_rome at the beautiful Spanish Steps 🌴 This is the view from poet John Keats’ bedroom, where he spent the last few months of his life ✨ It’s just one of the places on my list of 5 places to visit in Rome if you’re a literature lover ❣️ . Link in bio now 📚 . . . . . . . . . #romeitaly #visitrome #discoverrome #explorerome #doyoutravel #wanderlust #literature #travelgram #instatravel #travelinsta #italy🇮🇹 #italytravel #beautifulitaly #beautifulrome #romecityworld #instapassport #mytinyatlas #passionpassport #piazza #spanishsteps #johnkeats #keatsshelleyhouse
Amazing views over Surrey from the top of Box Hill yesterday 😍 I hope everyone else in the UK is enjoying the bank holiday weekend! . There was no new blog post yesterday - the first time I’ve missed it in a couple of months 😩 I’ve been swamped with job interview prep and just a little bit stressed so yesterday was a nice to chance to escape the city and get out somewhere new. I’d highly recommend visiting Box Hill if you’ve never been; it’s only an hour from Victoria station and £6.25 for a return ticket if you have a railcard! There’s a cozy @nationaltrust cafe at the top where you can stop for tea and cake, and plenty of walks in the surrounding woodland to do. It’s a great little day out 🌿 . . . . . . . . . . . . . . . . . . . #lovegreatbritain #visitengland #visitsurrey #boxhill #countryside #discoverengland #discoverbritain #doyoutravel #instapassport #mytinyatlas #surreyhills #england🇬🇧 #englandtrip #wheretogo #travelguide #travelengland #exploreengland #greatbritain #uk_greatshots #daytripper #travelgram #instatravel #travelinsta @visitengland @lovegreatbritain #unlimitedengland #ruralengland #beautifulengland #scenicbritain #mybritain
There are plenty of coffee shops in Brockley (I’ve seen more and more set up shop in the last few years), but my favourite is still @thebrocacafe ✨ . It has a perfect spot right opposite Brockley Overground station, and even blends in with the orange tube line with its bright yellow front 🌻 I love the mish-mash interior, with mirrors, curious second-hand objects (spot the duck in the window), and wooden floors. It’s the perfect cozy place for a coffee and a cake on a grey afternoon like today 🧁 . Expect more coffee shops like this to feature on the blog soon, as I’m working on a post about the best places in southeast London! . . . . . . . . . . . #londoner #londonbylondoners #brockley #londoncitylife #londonblogger #mytinyatlas #coffeeshop #london_only #londonpics #wheretogo #southeastlondon #mysecretlondon #londonist #timeoutlondon #londonfood #londoners #londoncoffeeshops #londoncoffee #explorelondon #discovelondon #doyoutravel #exploremore #coffeehouse
One of my favorite views in all of London ⛵️ . There’s a new blog post up today! I’m exploring another part of SE London for ‘Secret Southeast London’ - this time, Deptford. Here you’ll find a vibrant community market 🍎 the grave of an Elizabethan playwright 🎭 and the remains of a bustling ship-building industry 🚢 It’s well worth a visit, even more so at the moment as it’s the New Cross and Deptford Free Film Festival until the 5th May @nxdfff 🎬 . . Link in bio now! 🌊 . . . . . . . . . . . . . #deptford #riverthames #londoner #londonbylondoners #londoncitylife #londonblogger #london_only #londonist #timeoutlondon #londonguide #mytinyatlas #prettylittlelondon #prettycitieslondon #londonforyou #wheretogo #travelguides #londonpics #londonarchitecture #london_enthusiast #canarywharf #doyoutravel #travelnow #travellondon #londonphotographer #instapassport #traveldeeper #travelanddestinations #londonlove #explorelondon
Had fun yesterday watching the #LondonMarathon at Canary Wharf 🏃‍♀️ . I’ve always enjoyed visiting this part of London - there’s more to it than just banks and businesses, like @museumoflondon Docklands and the roof garden at the Crossrail station 🌴 . . . . . . . . . . . . . #londoner #londonbylondoners #travelphotography #englandtrip #londonist #timeoutlondon #london_city_photo #londoners #londoncitylife #londonguide #travelguide #travelnow #wheretogo #londonstreets #london_only #exploringlondon #explorelondon #visitlondon #londonpics #londonphotographer #culturetrip #londonblogger #londonguru #docklandslightrailway #canarywharf #museumoflondon
It looks it’s going to be grey in London this weekend, so I’m wishing for beautiful English spring weather like this for the next Bank Holiday in a couple of weeks 🌻 . 📷 River Wey, Guildford . . . . . . . . . . . . #englandtrip #igersengland #daytrip #discoveruk #instabritain #lovegreatbritain #visitengland #canalboat #prettylittleengland #england🇬🇧 #britains_talent #loveengland #lovegreatbritain #igtravel #travelphotography #travelguide #travelnow #wanderlust #doyoutravel #travelling #travelgram #exploreeverywhere #instapassport #uk_greatshots #traveldeeper #visitguildford #guildford #discoverguildford